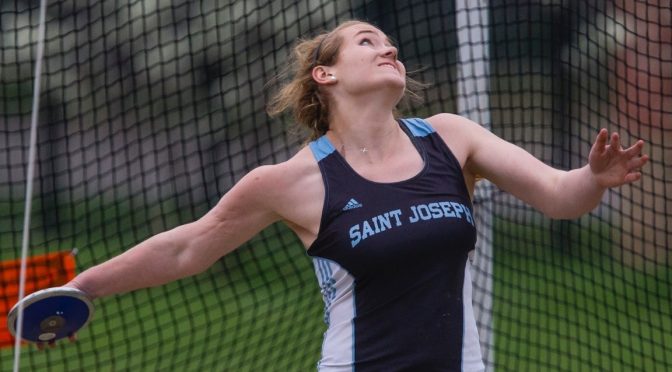 “I came to Crossfit South Bend’s Sports Performance
Program after my freshman season of volleyball. I was looking for
some sort of off season conditioning to stay in shape. At first I
was hesitant about the Sports Performance Program. It was really
intimidating being the one of the only females in the class with a
bunch of guys. However, as I got more familiar with the program and
started to see results in my performance I became a lot more
confident in my athletic ability and in my life in general. After
my sophomore season of club volleyball I had to have shoulder
surgery, and was not able to play my junior year. Following that I
decided to focus on throwing. I had thrown for track and field
since my freshman year but volleyball had been my primary sport. As
I recovered and regained my strength I started to see huge results.
There seemed to be a direct correlation with the progress I was
making in the Sports Performance Program and the progress I was
seeing in my throwing. I started to hear from college coaches and
the dream I had of being a college athlete started to seem more and
more realistic.

The Sports Performance Program is a lot more than just
offseason training, it is an opportunity to train with like minded
individuals and build friendships with other athletes from
different schools and different sports all working to be the best
athletes they can be. Training with these like minded individuals
changes your mindset and pushes you to do your best everyday in
your training. I’m really going to miss the training environment
and the people I’ve met through the Sports Performance Program!
There is no way I would be where I am today without
it.”